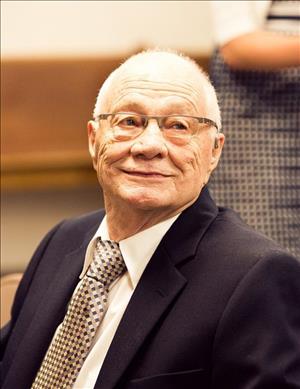 Earl was born October 2, 1929 on a farm near Tintah, MN, to Antone and Betty (Keller) Christianson. He grew up in Wendell, MN and graduated from Elbow Lake High School in 1947. Upon graduation from the Minnesota School of Business he married Jeanne Jaunty and settled in Elbow Lake, MN where he started his career in his father's farm equipment business. Earl was a pioneer in introducing the 4WD tractor to agriculture working closely with Douglass and Maurice Steiger to develop and market the Steiger tractor. He promoted and sold the first of them in the early sixties. As the original Steiger dealership, Christianson's Inc. went on to sell and service 4WDs in the southern Red River Valley area. Earl remained excited about new concepts in agricultural equipment, be it sprayers, tillage, tracks, or other innovations. He retired in 1991 and spent summers at the family lake cabin on West Battle Lake, later relocating to the area year around.

Earl and Jeanne, his wife of 66 years, raised 10 children in their sometimes chaotic home across the street from the school in Elbow Lake. Earl was a man of the highest integrity and instilled a deep sense of honesty, loyalty, and perseverance along with humility in his children. He had an enduring sense of curiosity and was constantly looking to the future, be it the advent of 4WD tractors or the consolidation of rural school districts. Earl was very active in the community serving on the bank board, school board, and other local volunteer organizations. He was an enthusiastic source of encouragement and inspiration for young and old alike.

A constant in Earl's life was his passion for training Labrador retrievers. He spent countless hours teaching "double" "triple" and "blind" retrieves to his field trial dogs (with reluctant but ample help of his boys). Some of his favorites (Shamus, Bozo, Toby, Doc, Nifty and Soupy, to name a few) kept him busy competing in various field trials. After retiring he often went south in the winter, dogs in tow, to train with the pros. Earl was a member of several retriever clubs and often served as a judge at field trials. He believed strongly in positive reinforcement as a training technique with his dogs as much as he did in life.

The family requests that any memorials are made to The Central Minnesota Retriever Club, P.O. Box 724, Sauk Rapids, MN 56379 - www.cmrcmn.org.

We will miss Earl - and together we celebrate a life well lived.

Following the Funeral Mass, all are invited to Veterans Park to celebrate Earl's life.

To order memorial trees or send flowers to the family in memory of Earl Christianson, please visit our flower store.