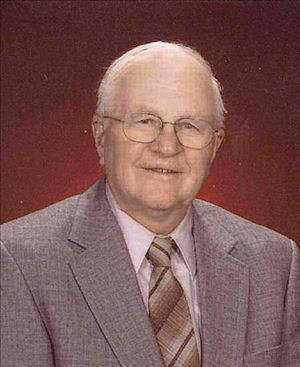 Dwaine Christianson, 85, Elbow Lake, died Saturday, August 25, 2012, at the Prairie Ridge Hospital in Elbow Lake. The funeral service for Dwaine Christianson will be held at 11:00 am on Tuesday, August 28, 2012, at United Lutheran Church in Elbow Lake with the Rev. Bob Toso officiating. Burial will be in the Erdahl Lutheran Cemetery, rural Elbow Lake. Friends may visit at the Erickson-Smith Funeral Home in Elbow Lake on Monday from 5-7 pm with a prayer service at 7pm; visitation will continue at the church on Tuesday one hour before the service. Dwaine Harold Christianson was born on August 25, 1927, in Delaware Township, Grant County, Minnesota, to Lloyd and Myrtle (Johnson) Christianson. He grew up in Delaware Township where he attended country school. Following his education, Dwaine began working with his father on the family farm. On May 1, 1948, he was united in marriage to LaVerne Mahla at the Erdahl Lutheran Church. The couple made their home in Delaware Township where they farmed until 1957, when they moved into Elbow Lake. Dwaine worked as a carpenter and was a service technician for Jenoff, Inc. in Fergus Falls. He semi retired at age 62 but continued to do projects for his entire family, friends and neighbors in Elbow Lake. Dwaine enjoyed fishing, hunting and golfing with his friends at Tipsinah Mounds Golf Course in Elbow Lake. He served as member of the Elbow Lake school board and as a deacon at United Lutheran Church. Dwaine had a servant heart, always willing to help those who needed it. Survivors include his wife LaVerne of Elbow Lake; children Rick Christianson of Merritt Island, Florida, Lyn Krull of Jackson, Mike (Lynn) Christianson of Marshall, and Ginny (Glen) Kegley of Hutchinson; one sister, Lois Carlson of Alexandria; and two sisters-in-law, Dorothy Christianson of Elbow Lake and Jean Gord-Anderson of Mesa, Arizona; ten grandchildren, Jill (Brandon) Harbaugh, Kara Christianson, Andrew (Jess) Krull, Amanda (Chad) Benda, Alyssa Christianson, Lee Christianson, Jenna Christianson, Laura (Jon) Rauenhorst, Bryan (Emily) Kegley, and Bridget Kegley; and six great-grandchildren, Samantha and Ian Harbaugh, Wyatt and Zenna Krull, and Christian and Rylee Benda. Dwaine was preceded in death by his parents; his step-mother Alice Christianson Bullis; one sister, Marge Larson; and two brothers, Lloyd Christianson Jr. and Jerry Gord. Memorials are preferred to the Prairie Ridge Hospital Foundation in Elbow Lake.

To order memorial trees or send flowers to the family in memory of Dwaine Christianson, please visit our flower store.