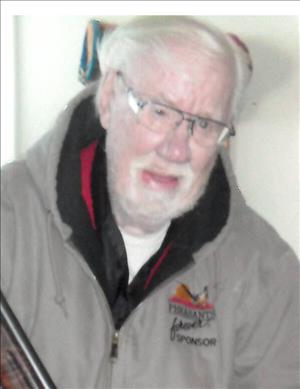 Duane Wellnitz, from Elbow Lake, decided to go hunting, fishing and soaring with the bald eagles forever on Friday, March 3, 2017 at the age of 80 years.

Duane Clyde "Red/Butch/Sammy" Wellnitz was born March 30, 1936 to Elvin "Al" and Lorraine (Olson) Wellnitz in Minneapolis, MN. While growing up in Minneapolis Red attended school in North Minneapolis High. He was also a paper boy for the Star Tribune. Many of his favorite memories from growing up came from being able to get baseball tickets to see the Minneapolis Millers. He was always asked by his uncles for these tickets, in exchange he got to attend the games with them and get all the hotdogs he could eat and all the pop he could drink. Red used to tell stories of how he got to watch guys like Willie Mays, Jackie Robinson and many more in that ballpark. Was amazing how many big timers he watched.

After Red graduated high school he attended barber school also in Minneapolis. Red later graduated as a Master Barber, which is what he loved to do for just about 60 years till his passing.

After Red graduated barber school he moved to Tintah, MN to be closer to his father. Red and Al farmed together for many years. It was from his interest in farming and right after he had purchased the Petermann home quarter from Henry Petermann that he found the love of his life Mary Petermann. All of Mary's younger siblings loved Red from the start because every time he came over he always had candy in his pockets for them!

On June 2nd, 1962 Duane and Mary were united in marriage at St. Gall's Catholic Church in Tintah. They began their married live in Tintah where Red barbered and still farmed. Red also barbered in Elbow Lake at the time as well. On June 28th, 1963, they had their first child Dorene followed by Duane on December 3rd, 1964, Debra on April 5th, 1968. Also in 1968 Red and Mary moved to Elbow Lake. After they moved Red gave up farming but continued to barber.

Not long after they moved to Elbow Lake, Red and Mary opened up and operated Red's Greenhouse. On August 6th, 1973, the couple welcomed Derek to the world. In the late 1970's early 80's Red opened up a pool hall, so all of the kids of Elbow Lake and surrounding communities had a place to get together for fun, play pool or video games. Also in the early days of moving to Elbow Lake Red also became a grave digger. Later in life he would tell stories of long nights, people trying to sneak up on him and scare him (very few actually pulled it off tho) and yes even a couple mishaps. As crazy as it may sound he always said that he enjoyed it tho.

On December 9, 1984 Red and Mary enjoyed the birth of their first grandchild Josh or as Red would call him Joshua John every time he saw him. In 1985 they also added Sarah & Becky thru marriage. In 1991 also added Jenifer Mary to the happy family. Red was always very proud of all of his grandchildren, loved being able to teach them how to hunt, fish and gopher trap. He also enjoyed giving driving lessons to them out in the field while they were out trapping.

Red never missed one sporting event or school event the grandchildren were in. Whether it was football that took him to Roseau Friday night and then volleyball to southern Minnesota Saturday morning, he was always there.

In Red's spare time he served in the Army Reserves for 35 years as a Mess Sergeant. In 1992 Red spent a long 9 months in the Panama with the Reserves. He enjoyed every minute he was with the guys of the 205th Infantry Brigade out of Fergus Falls. Later in life Red would teach his grandchildren how to cook, but it was hard because he couldn't just cook for two or four it was always 100's to 1000's. So there was always leftovers.

Red loved the community of Elbow Lake and could never imagine living anywhere else. Red also supported it anyway he could. He was on the city council was mayor, a volunteer firefighter Jaycees, part of the Knights of Columbus and was also an EMT specialist. He was also a member of the American Legion Post 321, Ducks Unlimited and Pheasants Forever, and yes he was also a lifetime member of the NRA. Red would always say "You can never have too many guns." And he definitely passed that down thru his boys and his grandson.

Red enjoyed many things in life hunting, fishing, gopher trapping, gardening (both his rose bushes and his big garden in the back), golfing, playing cards, making wine (which has won a few awards), reading and most important to him, being there for his family. He loved every minute he had with them and his grandchildren. As they would say he was their best hunting buddy, fishing buddy, and all around best friend. He even considered cutting hair a hobby, because he got paid to tell jokes, act silly and find out where the fish are biting the most?! He also enjoyed his Dairy Queen ice cream, root beer floats and his White Castle "hangabergs".

Red was one of the most loving, caring and giving guys you would ever meet. He was always willing to lend a helping hand or sell you a raffle ticket to help out a charity of any kind. He also saved pop tops for the Ronald McDonald house. If you ever had a question about anything from life to marriage, Red always had the answer for you. No matter what you needed Red was your guy. He always had some sort of wisdom for everything. He would also always tell everyone that "life is a gift and every minute that you get on this beautiful Earth should not be wasted, because you just never know when your number will be called. Enjoy life your way and see it all, there is a lot to offer you."

Duane was preceded in death by his parents, Elvin and Lorraine Wellnitz; and his trusty Chocolate lab hunting pal Recon.

Online condolences:
To order memorial trees or send flowers to the family in memory of Duane Wellnitz, please visit our flower store.