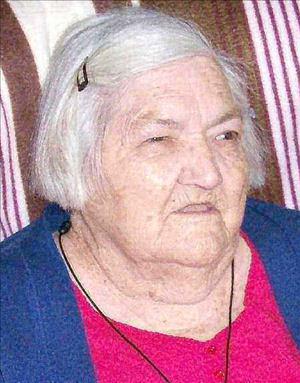 Dorothy Lucile Lanus, born April 17, 1922, passed from this world into the waiting arms of her Lord on March 30, 2013, having lived 90 years, 11 months and 12 days. Dorothy was born near Fonda, Iowa, to Dewey and Mabel (Peterson) Vote. She was the third child having two older and two younger brothers, Dewayne, Daniel, Delbert, and Delwin, all of whom predeceased her. Dorothy was baptized and confirmed in the Methodist Church. She was a Bible camp counselor as a teenager and taught Sunday school for many years. After the move to Minnesota in 1959, Dorothy became a member of the First Covenant Church of Kensington. After graduation from high school in Bradgate, Iowa, Dorothy met the love of her life, Clarence Lanus. They were married January 12, 1942. To this union five children were born: Clarence (Doris) Lanus, Hancock, MN, Larry (Judy) Lanus, Brandon, MN, Marvin (Lynn) Lanus, Fergus Falls, MN, Donna (Dennis) Dodds, Starbuck, MN and her youngest daughter Joyce Lanus with whom she shared a home for the past 30 plus years. Dorothy was the epitome of a hands-on farmwife. Not only did she keep house and raise the children, but always had a large garden, did much canning, and made bread twice a week. She was also extremely involved in the farming operation. She learned to do everything, and enjoyed doing it, especially fieldwork, but also put in her time milking cows and working with the livestock. In her free time, she enjoyed embroidery and crocheting. She believed in keeping busy. Dorothy spent a number of years in the mid 1960's very ill with sarcoidosis. The University Hospital stated that she was the first in the state of Minnesota to be diagnosed with the disease. From the studies that she courageously underwent, the disease became better known and easier to diagnose. It was her hope that no one else would have to endure what she did. She was a stoic person, and very seldom complained about the pain from which she suffered to her last day. Dorothy was preceded in death by her loving and much beloved husband, Clarence, an infant great-granddaughter, Kaitlynn, and a dearly missed granddaughter, Dacia.

To order memorial trees or send flowers to the family in memory of Dorothy Lanus, please visit our flower store.