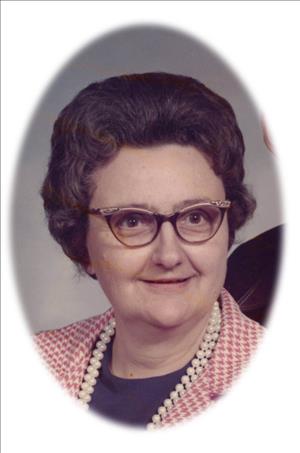 Doris Ruth-Stahl Christenson, 89 of Hoffman, died on Sunday, March 22, 2015 at Johnson's Home Plus in Barrett. Doris was born on December 26, 1925 in Ashton, South Dakota at her home, the daughter of Frederick Christian Matthew and Ruth Luella (Jones) Stahl. She was baptized into the Lutheran faith in Ashton, South Dakota. Doris graduated from Brentford High School in South Dakota where she was the valedictorian of her class. Upon graduation, Doris joined her family in rural Spruce Hill Township. From there she moved to Minneapolis where she worked at Sears until she met Ansel.

Doris and Ansel were married on November 22, 1952, in the Spruce Hill Lutheran Church, rural Spruce Hill Township. After their marriage, they farmed near Wendell and Barrett. They later moved to Alexandria for a short time before moving to their farm in Urness Township of Douglas County. They farmed for many years until moving to Hoffman in 1990 and took great pride and care in their gardens and lawn. She worked at the Kensington Creamery and PCA in Alexandria as a secretary. Doris was a special aunt to all of her nieces and nephews and their children. Doris loved being involved in a wide variety of family activities. She enjoyed a special relationship with Ansel's cousin, Arlou. In January, 2014, Doris moved to the Johnson Home Plus in Barrett where she developed a special friendship with Roberta Johnson. She was a member of the Solem Lutheran Church where she served as the parish secretary, taught Sunday School and bible study. She was president of the Ladies Aid and treasurer of the church. After the closing of Solem Lutheran Church, Doris became a member of the Messiah Lutheran Church in Hoffman. Her hobbies included gardening, sewing, and quilting. She made many beautiful quilts for the church. Doris's faith was very important to her. Her walk with God was strengthened by daily devotions and prayer.

Doris was preceded in death by her parents; her husband, Ansel and brother-in-law, Harvey. She is survived by two sisters, Donna Gunderson of Kensington, MN and Karen (Tom) Lathrop of Great Falls, MT; along with many nieces, nephews, cousins, and great nieces and nephews.

With visitation one hour prior to the service

To order memorial trees or send flowers to the family in memory of Doris Christenson, please visit our flower store.