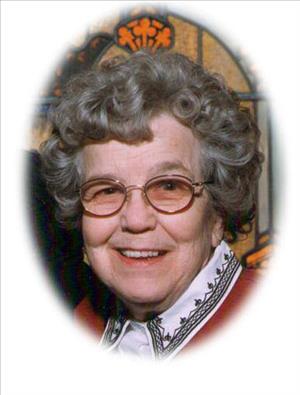 Dora Anderson, 84, of Hoffman, passed away on Tuesday, October 8, 2013, under the care of Douglas County Hospice at the Bethany Home in Alexandria. She had been a resident of the Glenwood Retirement Village for the past 1 ½ years. Services will be held at 11:00 a.m. on Saturday, October 12, 2013, at Messiah Lutheran Church, Hoffman. Visitation will be from 4:30-7:00 p.m. on Friday at the Erickson-Smith Funeral Chapel in Hoffman, and one hour prior to services at the church on Saturday. Burial will be in the Bethel Cemetery, Hoffman. Dora Jane Standafer was born on June 19, 1929, in Hancock to Alonzo and Grace (Mullins) Standafer. Dora was baptized twice – the first time in a river and later in the Church of the Brethren. She attended elementary school through the fourth grade in District 17. She moved with her family to Benson, Starbuck, and then Morris; she graduated from Morris High School in 1947. Dora worked for the Midwestern Bell Telephone Company, The Morris Sun, Bohn Drug Store and the Veterinary Office in Hoffman. Dora was united in marriage to Rodger Anderson on March 9, 1951. To this union four children were born: Janet, Connie, Curt, and Alan. Dora was a 40-year survivor of breast cancer. She was a devoted mother and had many hobbies that she passed on to her children. She baked bread and many goodies, made quilts for her children and all her grandchildren. She took painting classes and painted many pictures; she enjoyed playing pool with her friends, sang in the Senior Church Choir, and directed the Jr. Choir. She is survived by her husband Rodger; children, Janet (Darrel) Holverson, Connie Fields, Curt (Cindy) Anderson, and Alan (Becky) Anderson; seven grandchildren, Jason (Leah) Anderson, Kesha Anderson, Aaron (Andrea) Anderson, Jennifer Anderson, Brianna Holverson, Ryan Holverson and Chris Fields; and two great-grandchildren, Scarlett and Amelia Anderson. She was preceded in death by her parents and all of her siblings: Twin sister Della (Standafer) Trieschel; half-sisters Ada Griener, Ruby Luthi and Rosie Martin; half-brothers, Glen Cook, Earl Standafer, Ralph Standafer and Lloyd Standafer. Arrangements are with Erickson-Smith Funeral Home of Hoffman.

Please click here to view the video tribute
To order memorial trees or send flowers to the family in memory of Dora Anderson, please visit our flower store.