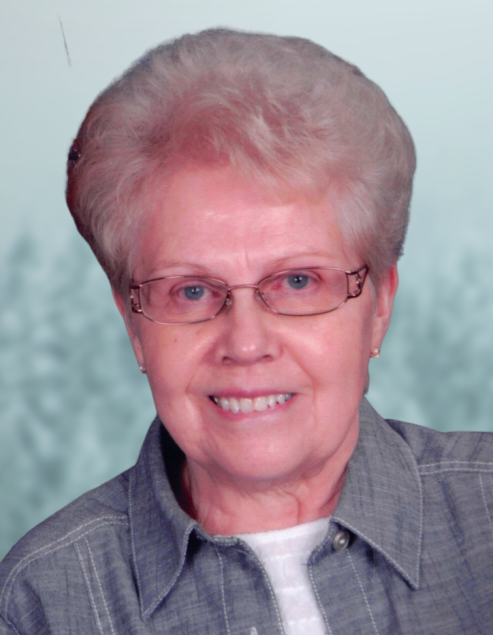 DonaLou was born July 11, 1937 in Fergus Falls, MN.  Parents were Leslie S Nelson and Gertrude Norton Nelson.  She grew up and attended school in Fergus Falls.  In 1955 she married Robert Hutchings (always “Bobby” to her until the end!).  Children included daughter Kris, and sons Timothy, Randy (died in infancy), Larry, Rick and Michael (died in 2005).

Bob and DonaLou lived in the Elbow Lake area until 1963 when they purchased their farm and moved to rural Barrett.  She was a stay at home mother and farm wife for many years, even learning to drive the tractor to help out with field work.  Considering her small stature, this was quite a feat.  In the early 1970s DonaLou made the decision to attain her GED and go to college.  She enrolled in courses at the University of Minnesota, Morris and got her degree in English and Education.  She taught junior high English at the Evansville Schools for almost 20 years.  After retirement, DonaLou tutored many students in her home for several years.  She always referred to the students as “her kids” and was very dedicated to getting them through the rough times in their lives, whatever that happened to be.  She was a significant positive influence to countless young people.  She was an active member of the First Presbyterian Church of Ashby, teaching Sunday School for many years until her health didn’t allow it.  Wednesday Bible Studies were a highlight of her week.

As a couple, Bob and DonaLou enjoyed camping, going out to eat and shopping for others and themselves.  DonaLou loved to read and do crossword puzzles and other word games.  She also played a lot of board games, especially Scrabble and was very hard to beat!

A private family service and burial will be held followed by a Celebration of Life to be scheduled in future months.  Blessed be the memory of our Mom, Grandma, Great-Grandma, Sister, Aunt, Friend and Teacher.  She will be greatly missed.

To order memorial trees or send flowers to the family in memory of DonaLou Hutchings, please visit our flower store.