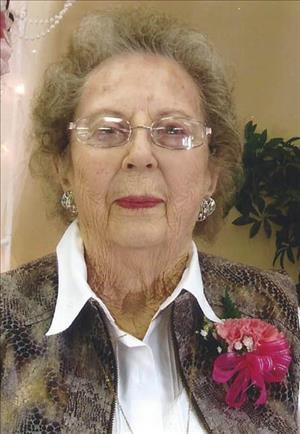 Deloris Strom, 93, of Barrett, MN, died on Tuesday, March 17, 2015, surrounded by her family, at the Meadow Lane Nursing Home in Benson. Deloris Ione was born on July 1, 1921, on the family farm in Sanford Township of Elbow Lake, the daughter of Swen and Lillie (Nelson) Swenson. She was baptized and confirmed at Ness Lutheran Church in Elbow Lake and attended the Round Lake School House. After school, Deloris worked various jobs including helping to raise children for friends and neighbors, helping her mother, Lillie, and waitressing at Olson's Café in Elbow Lake. On November 4, 1941, she married Elner Joseph Gerard Strom in Fergus Falls. Two children were born to this union, Doreen and Eldon. Deloris was a faithful caretaker to her husband and children. The family traveled all over the United States with Elner as he worked road construction in many different states. Eventually the family settled in Barrett where they spent many years. Deloris was also an avid house painter which she did with her sister, sister-in-law and neighbor friend. She moved to Benson the last six years to be closer to her daughter, Doreen. Deloris was a member of the Barrett Auxillary, Barrett Legion and very active in Freedom Lutheran Church currently Peace, in Barrett. Her interests included long car rides, shopping, fishing, and going out to eat. She was said to be famous for her baking and cooking and loved to spend time with her family and friends, especially her beloved grandchildren. Deloris was also an animal lover in which she cherished her Persian cats and dogs. She was preceded in death by her parents, Swen and Lillie; husband, Elner; siblings, Wallace Swenson, Theola McNabb, Thomas Swenson, Lowell Swenson and Gleo (Alvina) Swenson. She is survived by her children, Doreen (Mike) Touhey of Benson, MN and Eldon (Tina) Strom of Alexandria; five grandchildren, Melissa (Eric) Ziegler, Joseph Strom, Molly Strom, Chelsey (Brent) Hanson and Tyler Strom; four great grandchildren, Madison, McKenna, Samual and Jack; a sister-in-law, LouAnn Swenson of Barrett; three nephews, Ronald Klugg, Steven Swenson and Lance Swenson; one niece, Nadine Johnson, along with numerous great nieces and nephews. Memorial Service: 11:00AM, Friday, March 20, 2015 at Erickson-Smith Funeral Home in Hoffman with a Memorial gathering one hour prior. Burial: Wenersborg Cemetery, Kensington, MN Funeral arrangements are with the Erickson-Smith Funeral Home of Hoffman, MN.

To order memorial trees or send flowers to the family in memory of Deloris Strom, please visit our flower store.