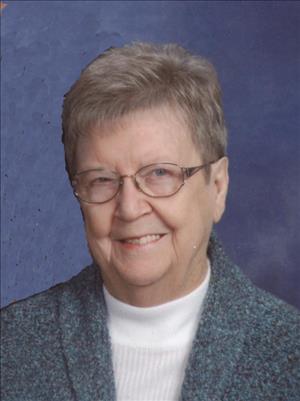 Collene Kloos, 81, Hoffman, died Thursday, June 09, 2011, at the Good Samaritan Society-Hoffman. She was born May 24, 1930, in Osakis, Minnesota, to Everett M. and Cora (Johnson) Reddick. She was baptized in the Lutheran faith at the Osakis Lutheran Church, Osakis, confirmed at St. John's Lutheran Church at Oak Hill, attended rural school at District 129 and graduated from the Osakis High School in 1948. Collene and Lawrence Charles Kloos were united in marriage by the Rev. Thronson at the Osakis Lutheran Church on July 10, 1954. Collene worked for the Runestone Electric Association in Alexandria prior to working full time on the family farm in Roseville Township. Collene was a faithful partner on the farm and a great mother who showed her love for her family with her great cooking and caring for her boys. In 1978, they moved to Barrett, and in 1995, to their home on Elk Lake. She became a resident of the Good Samaritan Society- Hoffman in October 2010. Collene was a member of the Eastern Star, the Helpmate Club in Roseville Township, and belonged to Peace Lutheran Church in Barrett. She loved spending time with her family, especially her grandchildren. Survivors include her husband Lawrence of Hoffman, sons James (Cindy) of West Fargo, ND, and Phillip (Julie) of Minnetonka; six grandchildren, Michael of Robbinsdale, Corey (Jill) of Jacksonville, FL, Aaron (Crystal) of West Fargo, ND, Christopher of Bloomington, Carson of Eden Prairie, Laura of Minnetonka, and three step-grandchildren, Gerald, Anna and Margaret Nelson, all of Minneapolis; one great-grandson, Morgun; two sisters, Marlys (Robert) Ferris and Doris (Leon) Curtis, both of Osakis, and one brother, Thomas (Sandy) Reddick of Evansville, and nieces and nephews. She was preceded in death by her parents and one brother, Kenneth Reddick. Funeral: 11:00 am Tuesday, June 14, 2011, Peace Lutheran Church, Barrett Clergy: Rev. Matthew Rose Burial: Lakeside Cemetery, Herman Visitation: 4-7pm Monday, June 13, 7:00 pm prayer service, Erickson-Smith Funeral Home, Hoffman; resumes one hour before service at church

visitation is one hour before the service

To order memorial trees or send flowers to the family in memory of Collene Kloos, please visit our flower store.