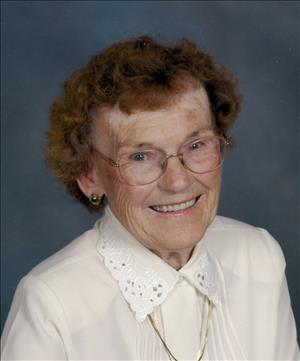 Claudia Gertrude Willhite, daughter of Andrew and Marie (Wall) Guenther, was born on Easter Sunday, April 20, 1924, on their farm southeast of Brandon, Minnesota. She was baptized at St. Ann's Catholic Church. In 1943 her parents were confirmed into the Missouri Synod German Lutheran Church at Hoffman, MN, and Claudia was confirmed into this church on April 3, 1944. She attended country school walking over 2 miles, rain or shine or snow storm. She also attended Evansville but changed to Barrett High School when the bus driver agreed to come on the back roads that the Evansville bus driver did not dare travel. She graduated salutatorian from Barrett on May 29, 1942. She lived through the depression in the 30s with eggs going for 7 cents a dozen and wheat going for 32 cents a bushel. She helped dress out hogs and shocked grain by hand. She writes, in a personal history, that she learned to stack grain from her mother, who was complimented on this talent by all the local farmers. After graduating from high school, she won a scholarship that would pay for the second half of the tuition to a college of her choice, but she first had to raise the money to pay for the first half. Claudia worked at miscellaneous jobs in the area making $3 to $8 a week, and even went as far as the "Cities" where she worked as a nurses' aide at the Deaconess Hospital in an attempt to raise that tuition. However, during the "Armistice Day Storm" she had met the love of her life, Leonard Ora Willhite. He was a grain farmer raising corn, wheat and soybeans mostly, living by Herman, Minnesota. Despite his busy life, he managed to travel the 25 miles to court Claudia. They were married on September 20, 1943, at Zion Evangelical Lutheran Church in Hoffman, and made a life together in farming. There were many noon, forenoon and afternoon lunches taken out to the field, and Claudia became handy at helping in the farm work, gardening, and occasionally dressing one of their chickens when company arrived without warning Leonard and Claudia enjoyed traveling all over the continental United States, the Hawaiian Islands, Canada, Mexico and, the high point of all, Italy, Egypt and the Holy Land in March of 1975. Claudia also traveled to Brazil in 1994. They spent many winters in a home they built overlooking Phoenix, Arizona, and they spent four years frequently driving back and forth to Vernon, British Columbia, Canada, where they owned a 10-acre apple orchard with strawberries and Bing cherries, high on a mountain side overlooking Kalamalka and Okanagan Lakes. Some of the happiest days of their lives. Claudia belonged to the Ladies Aide and Homemakers. She busied herself over the years with many hobbies including sewing, painting, gardening, and family history research. She took a special interest in her mother's family and reunited many cousins through family reunions she helped organize. She also volunteered several years as a Sunday school teacher and made posters to celebrate different seasons and events at the Zion Lutheran Church in Hoffman. Having a real heart for others, Claudia always had a kind word for everyone. She truly had the gift of hospitality, and no one left her home without at least lunch and a cup of coffee, whether you were a friend, neighbor or the repair man. Even while taking chemotherapy and radiation treatments after cancer surgery in 1993, she was always busy cheering up the other patients around her, always lending a loving ear to those who were hurting and fearful. Claudia died at the home of her daughter, Janice Anderson, with her four children by her side. She would have been 90 years old on Easter Sunday. Claudia is survived by her four children: Janice (Dennis) Anderson of Ashby, Leo Willhite of Rapid City, SD, Darlene (Doug Robinson) Willhite of Brooklyn Park, and Pamela (David) Watson of Mesa, AZ; twelve grandchildren: Angela (Michael) Paulson of Elbow Lake, Nicola (Wade) Humphreys of Sioux Falls, SD, Tanis (James) Riefenberger of Sioux Falls, SD, CloEve (Ryan) Demmer of New City, NY, and Brittany Anderson of New York, NY, Heather (Casey Reuck) Willhite of Akron, OH, Joshua (Jodi) Willhite of Spearfish, SD, Felicia (Maurice Tanner) Koepke of Brooklyn Park, Robert Willhite of Brooklyn Park, Lauren (Michael) Rockford of Mesa, AZ, Erin (Ty) Beal of Mesa, AZ, and Amber Watson of Mesa, AZ; and fifteen great grandchildren: Mikayla, Krista and Bryce Paulson of Elbow Lake, Chase and Logan Humphreys of Sioux Falls, SD, Kaden, Olivia and Ethan Riefenberger of Sioux Falls, SD, Ashton and Makenna Demmer of New City, NY, Ori Brand of Christiansburg, VA, Chad and Andrew Willhite of Rapid City, SD, and Cynthia and Nathaniel Tanner of Brooklyn Park. Claudia was preceded in death by her parents; husband Leonard; two sons, one in infancy and son, Allen; daughter-in-law, Charlene; sister, André Hartfiel; and two brothers, Gustavus and Phillip. Funeral: 10:00 am Saturday, April 5, 2015, at Zion Lutheran Church, Hoffman Clergy: Rev. Donald Wagner Burial: Zion Lutheran Cemetery, Hoffman Visitation:5-7 pm Friday, Erickson-Smith Funeral Home in Hoffman; resuming at the church one hour before services on Saturday.

Visitation will resume at the church one hour prior to the service.

To order memorial trees or send flowers to the family in memory of Claudia Willhite, please visit our flower store.