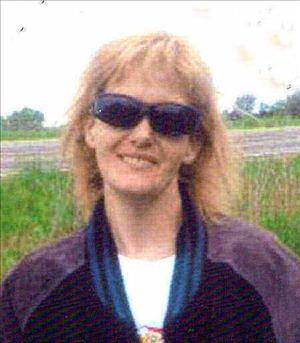 Cindy Hilde, 38, Breckenridge, died Friday, February 22, 2013, at Sanford Health in Fargo. A memorial service will be held at 7:00 pm on Friday, March 1, 2013, at the Erickson-Smith Funeral Home in Elbow Lake. Visitation begins at 4:00 pm Friday and continues until the time of the service. Private burial will take place in the spring. Cindy was born in Hopkins, Minnesota, on September 24, 1974, to Clifford and Terrance (Harmon) Hilde. She was baptized into the Lutheran faith and graduated from the Hoffman-Kensington High School in 1993. Following graduation, she was employed at the Flagship in Alexandria. She also worked for Cil's Kitchen in Barrett and at the Dew Drop Inn in Hoffman as a waitress. She enjoyed fishing, camping, flowers, and babysitting. She enjoyed NASCAR racing and was a Rusty Wallace fan. She also followed her brothers on the local dirt track races, as well. Cindy is survived by her brother Gallen Norris and her step-father Jerry Norris, both of Hoffman, as well as many other relatives and friends. She will also be greatly missed by her best friend, her dog Harley. She was preceded in death by her parents and her brother Richard Hilde.

To order memorial trees or send flowers to the family in memory of Cindy Hilde, please visit our flower store.