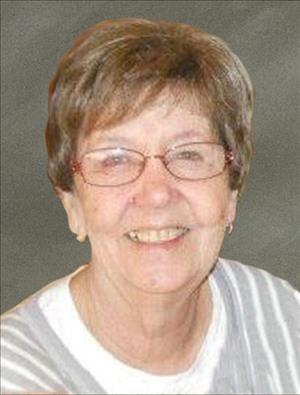 Cheri Lang, 66, Barrett, died at her home on Monday, March 10, 2014. A memorial service will be held at 1:00 pm on Monday, March 17, 2014, at Peace Lutheran Church, Barrett, with the Rev. Matthew Rose officiating. Visitation will begin at 11:00 am on Monday at the church and continue until the time of the service. Interment will be in the Bethesda Cemetery, Barrett, in the spring. Cheri Lee Bitzer was born November 8, 1947, in Hutchinson, Minnesota, the daughter of Theodore and Bernice (Pessek) Bitzer. She attended school in Hutchinson, graduating from High School in 1965. Cheri went on to attend the Minnesota School of Business. In 1969, Cheri met Jeffrey Lang, who happened to live in the same apartment building in Minneapolis. On July 17, 1971, Cheri and Jeff were married at Vineyard Methodist Church in Hutchinson, Minnesota.

Cheri worked for seven years as a secretary at Honeywell in Minneapolis. In 1975, the family moved to Barrett, where Jeff went to work for his uncle at Barrett Hardware. Cheri worked for thirteen years at the Barrett Care Center, where she grew very fond of the residents. Perhaps her favorite job though was being a mother to her three children. A music lover, Cheri often enjoyed singing and dancing, especially to the oldies and classic country. Seldom could Cheri pass up a trip to the casino, though she was very frugal. Cheri would also pass the time by cross stitching, gardening, and enjoyed many weekends with family on Eagle Lake.

She was a member and officer of the American Legion Auxiliary and also Peace Lutheran Church in Barrett, where she taught Sunday school. During her son Mark's senior year of high school, Cheri would routinely host team dinners on Friday nights before the games. Cheri adored her granddaughter Jenna and had the pleasure of caring for her from 2007 until she became ill. Cheri is survived by her husband Jeff of Barrett; three children, Todd (Kim) of Barrett, Erica Lang of Chaska, MN, and Mark of Barrett; one granddaughter, Jenna; her brother, Robert Bitzer of Annandale, MN, and her sister, Vicki (Ed) Bailey of Houston, TX; her niece Brittany Bailey and her nephew Edwin Bailey III; and an uncle, Delbert (Dorothy) Bitzer of Hutchinson. In addition to her parents, Cheri was preceded in death by numerous aunts and uncles.

Please click here to view the video tribute
To order memorial trees or send flowers to the family in memory of Cheri Lang, please visit our flower store.