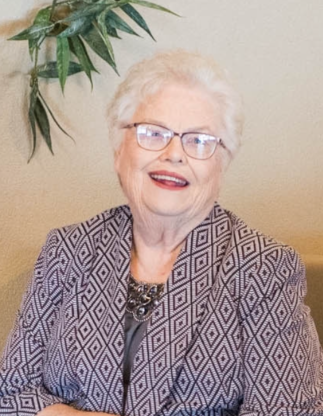 Carolyn Ann (Isakson) Alke was born on June 17, 1941, in Barrett Minnesota, the daughter of Carl and Rosetta (Johnson) Isakson.  She graduated from Barrett High School in 1959.  Following high school, she lived in Minneapolis and worked in the test kitchen at General Mills.

On August 27, 1960 Carolyn married Jerome Walter Alke in Barrett.  They moved to various places due to Jerome’s occupation as a heavy equipment operator.  In 1968 they moved to the family farm in Evansville where she helped with the farming.  She started working at the Pelican Lake Nursing Home in 1975 as a CNA, where she later was trained to be a Physical Therapist Assistant.  In 1988 she moved with Jerome to Palmer, Alaska. She worked for a short time for Veco Corporation during the Valdez Oil Spill.  After Jerome died, on February 13, 2000, Carolyn continued to live in Alaska until 2003. She then moved back to her home place in Barrett, MN.  She was employed at Arrowwood, first in the water park and later at the golf course, until she retired.  Her fellow employees fondly remember her as the Grandma to them all. She was known as a hard worker and was always giving hugs!! She would often bring in crock pots of food and baked good to share with her fellow employees.  Carolyn was a fabulous cook and always had an abundance of food in her kitchen. She was often teased by family members that she wasn’t satisfied unless she had a “three meat” meal prepared! She was best known for her homemade buns, apple pies, and cinnamon rolls. Carolyn had a gifted talent to sew and made many sets of pajamas, Halloween costumes and quilts for all her grandchildren. She loved her quilting time with the ladies at the church.  She also made many table runners and curtains for every holiday and season imaginable.  She loved to decorate her home with whatever season she was in changing the décor each month.  Christmas was her favorite.  She had lots and lots of Christmas decoration and every room in the house, including the bathrooms, were completely decorated!! She cherished her family, especially her great grandchildren, always trying to attend as many of their events as possible.

On Saturday November 14, 2020, Carolyn passed away at the age of 79 at Sanford Health in Fargo.

Memorial Service: 11:00 AM Saturday, June 26, 2021 at Peace Lutheran Church, Barrett with visitation an hour prior to the service.

To order memorial trees or send flowers to the family in memory of Carolyn Alke, please visit our flower store.