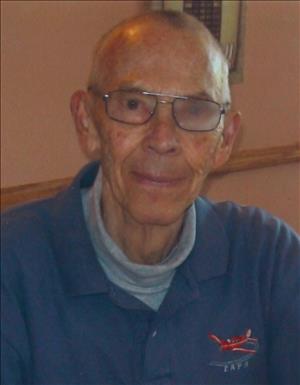 Carlton Renstrom was born on August 2, 1932 on the family farm near Elbow Lake, Minnesota, the son of Carl Ruben and Hanna (Anderson) Renstrom. He graduated from Elbow Lake High School in 1950 and enlisted into the United States Air Force, where he served for four years. He was married to Dorothy and they lived in California for many years. They had two children: Bradley and Beverly.

Carlton returned to Minnesota in 1991. He was extremely active in the development of the Elbow Lake Airport and was an active member of the Lakes Area Pilots Association. Most of all, he enjoyed flying his airplane. Carlton D. Renstrom, 82, of Barrett, passed away on Wednesday, August 13, 2014 at Rolling Hills Assisted Living in Barrett. He is survived by a son, Bradley of Amsterdam, Holland; daughter, Beverly Woxell of Santa Barbara, CA; four grandchildren; and a brother, Jerome (June) of Elbow Lake. In addition to his parents, Carlton was preceded in death by brothers, Ruben, LeRoy, Leonard, Garhart, Gordon, Harland, Roland; two sisters, Evelyn and Marvel. Per Carlton's wishes, he was cremated and private family services were held at Union Cemetery in Elbow Lake. Arrangements by Erickson-Smith Funeral Home Condolences: EricksonSmithFH.com

To order memorial trees or send flowers to the family in memory of Carlton Renstrom, please visit our flower store.