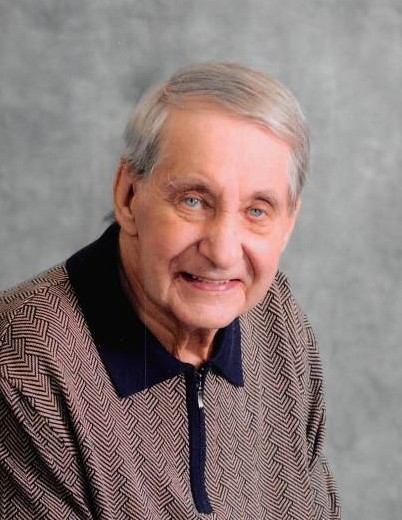 Byron was only four when his father died. He moved with his mother, Martha, to his grandparents’ farm. Grandpa Anton and Grandma Clara Leraas, and his Uncle Reuben Leraas cared for him while his mother attended beauty school. It was Grandma Clara he said who taught him the Lord’s Prayer.

When Martha completed her courses, she and Byron moved to Barrett where she worked at Frank Krafka’s barber shop.

The two moved to the Block farm when Martha and Earl Block married.

Earl and Martha had three girls, Deborah, Karen Marie and Carol Ann. Although they were technically half siblings, there were no feelings of halves. Byron teased, cajoled, argued and mentored and protected them.

He graduated from Barrett High School in 1958 and briefly attended Wahpeton State School of Science and later graduated from Alexandria Vocational Technical College in its welding program where he excelled in draftsman courses. He was employed by Clyde Manufacturing in Glenwood.

When an opportunity came to return to the family farm, Byron took it. He focused on hog production and raised Registered Durocs. He sold breeding stock throughout the region. He was a member of two swine research stations in the state and served on the Minnesota Pork Producers’ Council.

Byron was an innovative farmer and was also a member of the Sustainable Farming Association and Land Stewardship Project.

He obtained a Minnesota Department of Agriculture Sustainable Ag Grant to study gestating sows and gilts on cover crop pastures. What he learned he practiced on the farm.

Byron was active in 4-H and was a member of the Happy Hustlers 4-H Club. When his sisters joined the club, he was a mentor on their livestock projects, teaching them showmanship skills and how to care for their livestock. He also was manager of the club’s softball team for several years.

He showed the same dedication with his nieces and nephews’ 4-H projects over the years.

Byron loved sports, particularly the Minnesota Gophers and Minnesota Vikings. When the Gophers made their run to the Rose Bowl, his little sisters wanted brother time and would sit in front of the family’s black and white TV blocking his view.

“MOTHERRRR” reverberated throughout the house as he sought his mom’s help in keeping his pesky sisters away from his viewing time. He made a deal with them. If they would sit quietly during the game, they could dance and sing during the commercials. It was a fair trade, they figured. So, to keep entertained during the game, they asked him questions about the game, Byron, ever the teacher, explained in detail how the game was played. As a result, he gained loyal fans who enjoyed watching sports with him.

Although a heart condition kept him from participating in a lot of high school sports, he enjoyed playing football, baseball and basketball with his family. Football games were a regular feature with the cousins during Thanksgiving gatherings. During the summer, he played softball with his sisters in the front yard. And, during the winter months, he would play football on his electric football set devising teams, leagues and a playoff system.

He enjoyed music and played clarinet in the high school band and sang in teh school choir. But, when sister Deborah asked him to sing the Lord’s Prayer at her wedding, people commented on his singing ability and soon he was asked to join the Grant County Barbershop group. He sang solos at church services and with the men’s group at Peace Lutheran Church. He joined sister Karen Marie with cousins Bonnie Leraas, Lynette Moen, Orlo Thompson and Claremont Anderson to create a group they called the Leraas Family Singers. Their main singing venue was Immanuel Lutheran Church sing a longs. He’d been a member of that church until it closed, but they opened it to sing-a-long events throughout the year. The group also performed at several area events and functions.

Byron was encouraged to try out for the Prairie Wind Players production of the musical “Annie.” Under the direction of Roger DeClercq, Byron gained a love for performing and for Prairie Wind Players. One of his favorite roles was his performance of Burt Healy in “Annie.” He reprised the role years later and took part in other PWP productions.

In the late 1970s, he started slowing down. A heart ailment he’d had all his life needed attention. The heart specialists he’d met with every year said he needed surgery - he needed a valve replacement. The valve he received was metal but was designed thanks to research doctors conducted on the pig heart. The very animals he raised in turn saved his life.

Although he had to take blood thinners for the rest of his life, Byron said it was a small price to pay to be able to do the things he wanted.

Byron loved family, although he would flinch if anyone tried to give him a hug. He showed his love through nurturing and steadfastness.

He enjoyed hunting, especially pheasants and deer, and he loved hunting gatherings with family and friends.

With his sister, Karen Marie, he grew a large garden and was one of the organizers of the Elbow Lake Farmers Market. The two also raised broilers and layers and sold chicken, eggs and produce. Byron also sold at the Barrett and Fergus Falls farmers markets.

Byron’s interest in fairs and 4-H was evident when he became a Grant County Fair Board member. It was a position he held for 20 years.

He loved history, enjoyed reading and spending time with the dogs who’ve been his faithful companions.

As his mobility became limited, he enjoyed car rides with Karen Marie, his caregiver, to visit friends, attend church services and get a Dairy Queen treat.

Byron is survived by three sisters, Deborah (Allen) Alberg of Henning, Karen Marie Block of Barrett and Carol Ann (Doug) Stender of Fergus Falls; numerous cousins, nieces, nephews, grand nieces and nephews, and aunt, Adeline Leraas of Hoffman. He was preceded in death by his parents.

Visitation: 4 – 6 PM Sunday at Peace Lutheran Church, and resuming one hour prior to the service.

To order memorial trees or send flowers to the family in memory of Byron Bartz, please visit our flower store.