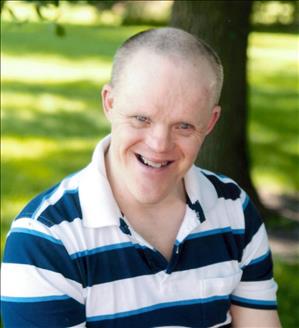 Brian Lee Amundson of Hoffman passed away peacefully Saturday, April 2, 2016 at Ecumen Bethany Home in Alexandria at the age of 51, surrounded by his "big family." Brian was born on June 14, Flag Day, 1964 in Morris, MN to Russell and Ione (Lindor) Amundson. He grew up on the family farm north of Norcross and, with the help of family and friends, far exceeded the world's expectations of what his life would be. He graduated from Herman High School in 1985, crossing the stage to receive his certificate from his mother. Brian moved to the REM house in Hoffman in November of that year. Brian worked at Anderson's Recycling and then the Recycling Center and DAC in Hoffman until his passing. Brian earned the reputation as a fun loving, hard worker who loved to tease. Brian loved movies, was a diehard sports fan, (especially the Vikings), and his two favorite holidays were April 1st (which could last for months) and June 14, Flag Day, his birthday. Brian loved his big family, and his big family loved him. He was a ray of sunshine to everyone he met and will be sorely missed by his family, his REM family, his DAC family, and everyone that knew him. All have a favorite "Brian story." Brian is survived by his siblings, Gary (Diane) of Barrett, Jean (Kevin) Chisholm of Fertile, Mark (Sue) of Herman, Duane (Darla) of Glyndon, Daryl (Connie) of Barrett, Lowell (Julie) of Morris, Mary (Mike) Carmody of Lake Benton, Janice (Brian) Bolcerek of Brandon, SD, Joyce (Roger) Schone of Frisco, TX, and Scott (Alicia) of Barnesville, along with 29 nieces and nephews, and 8 great nieces and nephews. He was preceded in death by his parents. Visitation from 4:30PM to 7:30PM on Friday, April 8 at Erickson-Smith Funeral Home, Hoffman with a Prayer Service starting at 7PM Funeral Services for Brian will be at 10:30AM Saturday, April 9, 2016 at United Methodist Church, Herman with Reverend Darrell Boe officiating Interment at Lakeside Cemetery, Herman, MN. Arrangements by Erickson-Smith Funeral Home of Hoffman. Brian's Video Tribute

A Prayer Service will begin at 7PM. Visitation will resume one hour prior to the service at the church.

To order memorial trees or send flowers to the family in memory of Brian Amundson, please visit our flower store.