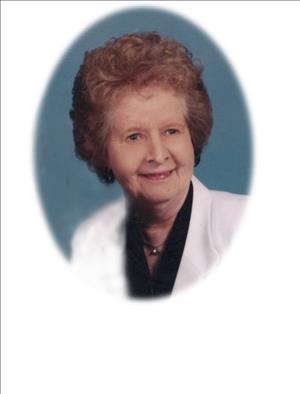 Blanche Magdaline Goodwin, age 100 from Hoffman, was called home to her Heavenly Father on May 25, 2015. Blanche was born March 3, 1915 in Elbow Lake, MN. She was the first of nine children born to Harry & Lillie (Johnson)Stavos. Blanche was baptized in Hjerdahl Lutheran Church and confirmed in Ness Lutheran Church, Elbow Lake. On October 8, 1938 Blanche married Francis Goodwin and they were blessed with three children, David, Dianne & Cherryl. They purchased their dairy & grain farm in Land Township, Hoffman in 1941 where they farmed until 1981. They then made their home in Urness Township, and in 2000 moved to the city of Hoffman where they remained until they became residents of the Good Samaritan Home. Blanche was a resident of Brandon's Assisted Living in Brandon, MN until her death. She was very happy with her stay and loved her caregivers and fellow residents. Blanche was an active member of First Lutheran Church, Kensington, teaching Sunday School for 16 years, held several offices in the Women's group, served on the church board and was a member of Koinonia Bible Study Club. Blanche served several terms as a 4-H Club Leader and functioned as the school P.T.A. treasurer and secretary. Upon retirement from farming, Blanche was employed by Public Health Nursing Service until the age of 87, when she retired. Blanche enjoyed landscaping, flowers and being with her friends and family. Francis and Blanche met at a dance and danced every Saturday night with friends at the Barrett & Glenwood ballrooms. She treasured time spent with her children, grandchildren, great-grandchildren and great-great grandchild. Blanche is survived by her daughter Cherryl (Ritchie) Johnson of Hoffman; daughters-in-law, Ruth Ann and Jordy; son-in-law, Curtis; sister, Helen Mack; brother, Phillip Stavos; grandchildren, Gwyn (Jon) Dalum, Michael (Sharon) Goodwin, Rachelle (Jim) Slaikeu, Colleen (Dan) Emerson, Christi (Henry) Blaskowski; great-grandchildren, Breanna, Michaela, Lauren, Julia, Andrew, Hannah, Aliyah, Blake, Ethan, Erin; great-great grandchild, Sammy, along with many special friends, cousins, nieces and nephews whom she loved and appreciated. Blanche was preceded in death by her parents; six siblings; her loving husband, Francis; beloved children, David & Dianne, and granddaughter, Elysia. Funeral Services will be 11:00AM, Saturday, May 30, 2015 at First Lutheran Church, Kensington with Reverend Kathryn Rothman officiating. Visitation will be held one hour prior to the service at the church. In lieu of flowers, the family prefers memorials to First Lutheran Cemetery Association and Knute Nelson Hospice. To order memorial trees or send flowers to the family in memory of Blanche Goodwin, please visit our flower store.