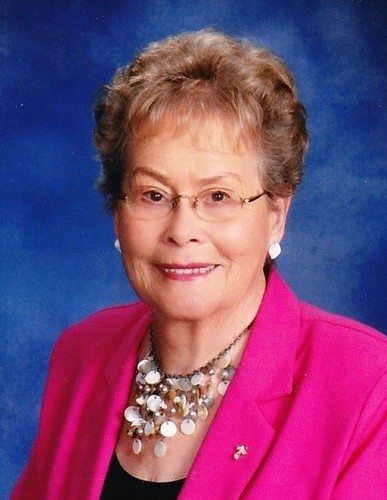 Beverly Jane Severin (Peterson) was born on April 10, 1927, in Minneapolis General Hospital, the only child of Lorna Helene (Jackson) Severin, and Paul Michael Severin. Bev passed away peacefully at the age of 93 on April 23, 2020, in the loving care of the nurses and aides at the Barrett Care Center in Barrett, MN, where she lived the last 3 1/2 years of her life.

When Bev was 8 years old, the family moved from Minneapolis to Minnewaukan, ND.  During her high school years, Bev wrote articles and poems for the school paper and played the tenor sax in the band, two skills that she would enjoy doing for her entire lifetime.  In the middle of her junior year, she and her mother moved to Dayton OH for only six weeks, then to Minneapolis.  Bev graduated from Minneapolis North High School in 1945.

After graduation, Bev worked at the local telephone company for several years.  She met her future husband, Gordon ‘Gordy’ Peterson at a local dance, and they were married on August 19, 1950.  They began their married life together in Perham MN where Gordy began his career as a band director.  In 1953, they moved to Elbow Lake where they started their family, having 5 boys in 5 years from 1955 to 1960.  While she occasionally worked part-time outside of the home, her main occupation was raising her children, supporting Gordy’s band program, and serving on many church and school committees.  She was active in leading ladies church circles, singing in the church choir, teaching Sunday school and school release time classes, and participating in the Stephen Ministry, as well as being the first woman deacon to be allowed to serve communion at United Lutheran Church!

The Peterson family spent much of each summer at the family cabin on Eagle Lake, which Bev and Gordy built in 1956. Bev loved swimming in the cold Eagle Lake waters, and, at the urging of her husband and kids, waterskied and, in later years, tried her hand at tubing.  Bev played tenor sax in the family band well into her ‘80s.  She composed the words to “Eagle Lake Rouser” and “Hail to Thee ‘O Beautious Eagle” that became shoreline traditions.  Bev and Gordy became great life-long friends with their cabin neighbors, spending many mornings enjoying the sunrise and sipping coffee together. Family camping trips to Potato Lake, Yellowstone, the Grand Tetons, and the Canadian Rockies were also summer highlights, as well as an annual fishing trip to Rainy Lake. After Gordy’s retirement, they spent a couple months each winter down south, the first year in California, and the following several years in Florida.

After Gordy passed away in 1998, Bev continued the family traditions and visited her sons and their families as often as possible.  With them, she went on camping excursions, enjoyed concerts, plays, and town celebrations, attended worship services, celebrated birthdays, went to Twins games and movies, and of course continued spending time with everyone at Eagle Lake.

Bev first came to know her Lord and Savior Jesus Christ when she was engaged to Gordy. Openly living her faith, and teaching her children to love Jesus were a great passions of hers, and all of her children were baptized, and later confirmed their Christian faith.

Due to the world health conditions, her family was not able to be with Bev at the time she passed.  However, we KNOW she was surrounded by the love of Jesus Christ and His everlasting grace.

To protect the health and safety of all, services are currently being limited as required by state and local authorities and the CDC. Expressions of sympathy during this time can be left on the condolences page available with the obituary on our website. We also encourage you to view the video tribute and/or webcast of the service that may be available. Check the funeral home website for the latest COVID-19 update.

A private service will be held at 2:00 PM Wednesday, April 29, 2020, with a live stream available at www.ericksonsmithfh.com for those wishing to participate.

Funeral arrangements are entrusted with the Erickson-Smith Funeral Home of Elbow Lake.

To order memorial trees or send flowers to the family in memory of Beverly Peterson, please visit our flower store.