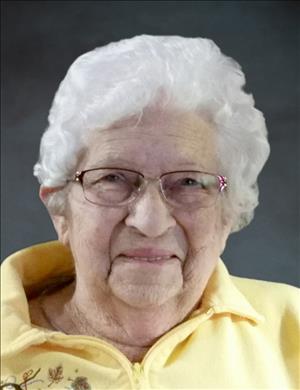 Beverly Hubbard, 90 of Barrett died Wednesday, September 21, 2016, at the Central Todd County Care Center in Clarissa. Beverly Mae Hubbard was born on May 5, 1926, in Laurens, Iowa the daughter of Morris and Grace (Davis) Wiley. She was baptized and raised in the First Christian Church in Laurens and graduated from the Laurens High School in 1944. Beverly and Harold Hubbard were married at First Christian Church on September 9, 1944, in Laurens. After their marriage they lived in Iowa until they purchased their farm by Barrett in 1950, where they raised their six children. They farmed together planting flax, corn, soybeans, wheat and sunflowers. In the mid 1960's they started raising chickens, and in 1973 they built a chicken barn raising 10, 000 laying hens which they operated until 1991. They continued farming until their retirement in 2008. Beverly also worked as a Nurses Aid with the Elbow Lake Hospital and also as a secretary at the Hoffman Coop. She liked cooking, baking, knitting, crocheting, playing cards, bingo, word search, crossword puzzles and loved the casino! Harold and Beverly enjoyed traveling throughout the USA, and took several trips overseas. She was a Minnesota Twins and Vikings fan. She was a longtime member of the First Presbyterian Church where she was active with the Women's organization, served as a trustee and taught Sunday School and Bible School. She was active in the Barrett PTA, and was a Den Mother when her boys were in Cub Scouts. She cherished the time spent with her family, especially her grandchildren. She is survived by four children, Virginia (Roland) Gilbert of Bertha, Kenneth (Ruth Ann) Hubbard of Elbow Lake, Bruce (Sharon) Hubbard of Shakopee and Larry (Pamela) Hubbard of Elbow Lake; sister, June Richardson of Spencer, IA; brother, John (Shirley) of Phoenix, AZ; son-in-law, Dan (Margaret) Strickler of Park Rapids; sixty-four grandchildren, great-grandchildren and great-great grandchildren; and by numerous relatives and friends. Beverly was preceded in death by her husband, Harold on November 12, 2010; parents, Morris and Grace Wiley; son, Dennis Hubbard (1964), and daughter, Janet Strickler (2002). Funeral Service: 11:00 AM, Monday, September 26, 2016, at Peace Lutheran Church in Barrett. Visitation: Sunday from 4 to 6 PM at the Erickson-Smith Funeral Home in Elbow Lake and one hour prior at the church. Clergy: Rev. Don Reisig Interment: Union Cemetery in Elbow Lake Funeral Home: Erickson-Smith of Elbow Lake Condolences: ericksonsmithfh.com To order memorial trees or send flowers to the family in memory of Beverly Hubbard, please visit our flower store.