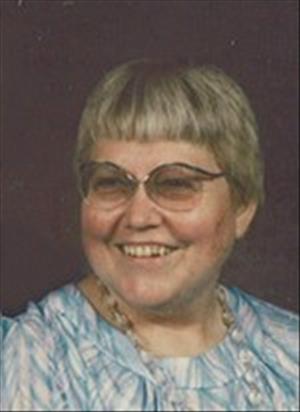 Beulah (Mrs. Howard) Iverson, 83, Moorhead, died Thursday, December 31, 2009, at the Eventide Nursing Home in Moorhead. Funeral services for Beulah Iverson will be held at 11:00 am on Monday, January 11, 2010, at the United Methodist Church in Herman with the Rev. Mickey Olson officiating. Burial will be in Lakeside Cemetery, Herman. Visitation will be held two hours prior to the service at the church.

Beulah was born November 24, 1926, to John and Clara (Carlson) Bruse. She attended Corndale School, a rural school in Grant County, and graduated from Herman High School.

On October 30, 1947, Beulah was united in marriage to Howard Iverson. In 1958, they bought her parents' farm in Gorton Township. They were members of the Faith United Methodist Church in Norcross, where Beulah was active in the ladies aid and made numerous quilts and rugs for the missions. While raising their four children, Beulah was also involved in 4-H. She and Howard took up square dancing and enjoyed the company of fellow dancers. In 1992, they retired and moved to Elbow Lake. Beulah worked in the kitchen for the senior nutrition center, and Howard delivered the meals. Howard passed away August 7, 2004, and in the fall of 2005, Beulah moved to Moorhead. She is survived by her children Diana Iverson of Fargo, Bonnie (Eldon) Olson of Fargo, Robert (Cindy) Iverson of Norcross, and Duane Iverson of Fargo; grandchildren John Arvesen, Christopher Olson, Jennifer Olson, Lisa Iverson, Brent (Kandi) Hemingsen, Scott Hemingsen (Melissa Comstock), and Brady Iverson; great-grandchildren Michael, Ryan and Brandon Arvesen, Ally Amborn, Dominique Hemingsen and Damin Berg, Hunter Hemingsen and Jaydn Comstock. Beulah was preceded in death by her parents and her husband Howard.
To order memorial trees or send flowers to the family in memory of Beulah Iverson, please visit our flower store.