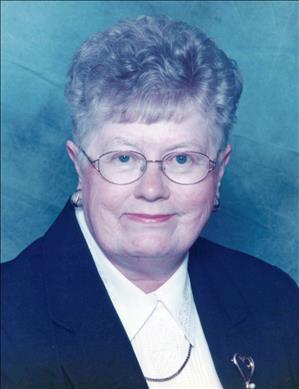 Betty Ann Johnson, the eldest of three daughters born to J. Edwin and Pearl (Noid) Johnson was born August 22, 1941, at the original Stevens County Hospital in Morris, MN. She was raised on the family farm in Land Township, Grant County, Minnesota. Betty was baptized at the Wennersborg Lutheran Church in October of 1941, by Pastor B.G. Holmes. It was at the Wennersborg Church her faith journey began. She attended Sunday School at Bethel Lutheran Church in Hoffman as there were too few children left to hold Sunday School at Wennersborg. When the Wennersborg Church was destroyed by fire on December 1, 1948, and not rebuilt, the Johnson family became members of Bethel Lutheran Church in Hoffman. Here Betty was confirmed in June 1956, by Pastor Edward Peterson and where she remained a member as well as later at Messiah Lutheran Church.

Betty attended grades 1 - 12 at the Hoffman Public School graduating with the Class of 1959. Following high school she worked as a child caregiver for children of several Hoffman school teachers.

The Johnson family moved from the family farm into Hoffman in 1962. In 1965, Betty began employment at the Hoffman Nursing Home. She was later trained as a Physical Therapist Assistant. She retired from that position in May of 2008. During her career she ambulated residents thousands of miles through the hallways and did range of motion on hundreds of limbs at the Nursing Home. She was also a caregiver to her parents and sister, Corrine as needed. Betty and Ruth took many tours through the years traveling to most of the states and in Canada. A favorite trip was to the annual Norsk HA�stfest in Minot, N.D. for a number of years.

After retirement in 2008, Betty and Ruth purchased a twin home in Kensington. They became members of First Lutheran Church in Kensington. She volunteered at church, was an avid reader, an active member of the Wennersborg Cemetery Association, serving on the board of directors and secretary. She volunteered countless hours at the Wennersborg Cemetery through the years.

Betty was preceded in death by her parents (mother in 1980 and father in 1988) and sister, Corrine Pearl in 1998. She is survived by her sister Ruth, of Kensington, a number of cousins, and a host of friends from her employment years.

Memorial Service will be 2:00 PM, Wednesday, August 23, 2017, at the Historic Wennersborg Cemetery of rural Kensington, and tent and chairs will be provided. Interment will be in the Wennersborg Cemetery followed by treating everyone to pie ala mode and coffee at the First Lutheran Church basement in Kensington.

To order memorial trees or send flowers to the family in memory of Betty Johnson, please visit our flower store.