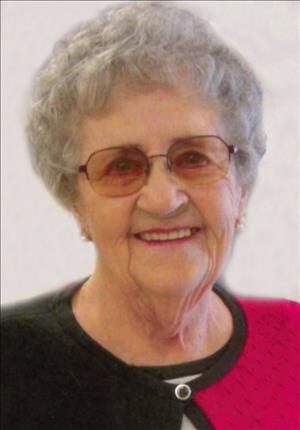 Betty J. Hagen, 80, of Cyrus, died Saturday, November 22, 2014, at Stevens County Medical Center in Morris. Betty Jane Amerson was born on December 22, 1933 in Walden Township, Pope County, Minnesota, the daughter of Louis and Mathilda (Brue) Amerson. Following the death of her father at age six, her mother moved Betty and her five sisters into Cyrus. Betty attended school there, graduating from Cyrus High School. After receiving her education, she moved to Minneapolis and worked at Sears for a time, later returning to Cyrus and working at the Ahlstrand Creamery.

On June 19, 1954, Betty married Vernon Hagen at Trinity Lutheran Church in Cyrus, and they were blessed with five children. Betty was much more than a homemaker or "farm wife". Farming was her passion, and she took an active role in the daily farming activities, in addition to the task of raising a family. Still residing on the farm up until her death, Betty would tell you she was still active in the farm and never gave retirement a thought. She was active in Nora Lutheran Church with Ladies Aide and church activities, enjoyed embroidery, puzzles, card games, and was a prized baker. She took several trips over the years and after Vernon's passing, to destinations such as Alaska and Hawaii with friends and relatives. Betty was highly sought after for her cooking, attracting friends and neighbors with a generous cup of coffee, cookies and lunch. Her grandkids and great-grandkids were her pride and joy and she loved them very much. Betty is survived by her five children: Wayne (Charla) of Spencer, WI, Orvie of Paynesville, MN, Keith of Cyrus, Darby (Brad) Morcomb of New Brighton, MN, and Mark (Kathi) of Georgia; seven grandchildren: Christal (Jake), Justin (Emily), Jenna, Jacob, Amber, Derek, and Brady; a step-grandson, Mike Schultz Hagen; two great-grandchildren: Karson and Conley; sister, Lois Gunvalson of Starbuck; and brother-in-law, Oran Wilberg of Kensington. In addition to her parents, Betty was preceded in death by her husband, Vernon in 2003; two grandchildren: Katie and Cody; four sisters: Sally (Abner), Ella, Shirley (Wilbert), and Marlene (John); and brother-in-law, Toby. In lieu of flowers, memorials are preferred to the area food shelf. Visitation: 5 – 7 PM Monday, at Erickson-Smith Funeral Home in Hoffman. Visitation resumes one hour prior to services at the church. Funeral Service: 10:30 AM Tuesday, November 25, 2014, at Nora Lutheran Church, rural Kensington Clergy: Pastor Kathryn Rothman Interment: Nora Lutheran Cemetery Condolences: EricksonSmithFH.com

To order memorial trees or send flowers to the family in memory of Betty Hagen, please visit our flower store.