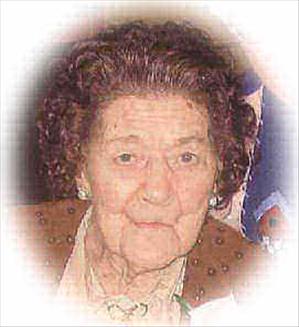 Bernice Waye, 101, Hoffman, died Wednesday, June 8, 2011, at the Good Samaritan Society – Hoffman. Funeral: 11 a.m. Saturday, June 11, 2011, Erickson-Smith Funeral Home in Hoffman Clergy: Rev. William O. Gilbert III Burial: Union Cemetery, Elbow Lake Visitation: one hour prior to the service Bernice was born on October 29, 1909, in Maine Township of Otter Tail County, Minnesota, to Charles A. and Annie Caroline (Battleson) Browne. She grew up in the Maine Township and Underwood area. As a young adult, Bernice worked in retail in Fergus Falls. On September 6, 1932, Bernice married Tolbert Waye at Sisseton, South Dakota. They lived in Elbow Lake and raised their five children. They were married 53 years before Tolbert passed away in 1985. After living in Elbow Lake for 71 years, Bernice moved to the Good Samaritan Home for the last years of her life. Bernice enjoyed reading and keeping up with the world news and events. She encouraged people to develop their skills, talents, and potential. She kept connected with people who were important to her via the telephone. Her favorite sayings were, "Be glad you can work" and "Life is hard by the yard, but by the inch it's a cinch." Survivors include her children Virginia (Ronald) Nelson of Grand Junction, Colorado, Terry (Margie) Waye of Elbow Lake, Bonnie (Doug) Tschetter of Wentworth, South Dakota, Mark Waye of Minneapolis, and Scott (Pat) Waye of Sartell; 13 grandchildren and 11 great-grandchildren. She was preceded in death by her parents, husband Tolbert, 11 sisters and brothers, and grand-daughter Renee Nelson.

To order memorial trees or send flowers to the family in memory of Bernice Waye, please visit our flower store.