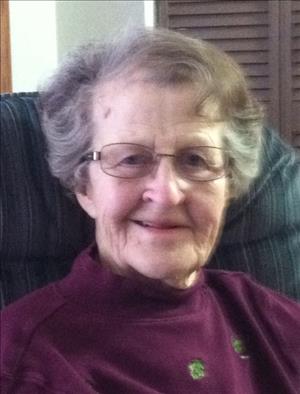 Bernice Hauglie, 85, of Elbow Lake, passed away Thursday, December 24, 2015, at the Barrett Care Center. Bernice Olive Carlsen was born on August 23, 1930 in Ceylon, Minnesota, the daughter of Alfred and Ruth (Apland) Carlsen. She grew up on the family farm, and graduated from Ceylon High School in 1948. Bernice worked at a coop as a bookkeeper before moving with her family to Kensington in 1949. Her first job as a grocery store cashier was at the old Red Owl store in Kensington, MN. On April 16, 1952, Bernice married DeWayne Hauglie on her family's farm in Nora Township, and they were blessed with three children. In 1953, the family moved to Glasgow, Montana, where DeWayne worked at a Massey-Harris and Dodge dealership, while Bernice was able to stay at home and raise her children. In 1958, they returned to Elbow Lake. DeWayne and Bernice built a new home in 1960, and they moved into it in the fall. Bernice went to work for the Red Owl (later Supervalu) grocery store from 1968 until retiring in November of 2010. She was featured in the newspaper several times, as in her time as a clerk, she started out with a mechanical cash register and by the time she retired, was operating a computerized point of sale system. Bernice was known as "grandma" to many of the younger employees at the store and mentored of her co-workers, young and old. She enjoyed baking, going out for dinner with DeWayne; flowers, which was her passion with her beautiful flower beds; and was a skilled seamstress, sewing all of her children's clothing and also made and sold Barbie doll clothing. Bernice was a member of the band boosters and United Lutheran Church, where she was active in church circles and taught Sunday school. Bernice is survived by her husband, DeWayne of Elbow Lake; three children, Rita Gehrke of Elbow Lake, DeLyle (Colleen) of Lisbon, ND, and Darla (Brad) Raguse of Wheaton; eight grandchildren, Tanya (Jon) Winter, Jade (Jen) Gehrke, Brandi (Luke) Knowles, Christopher Raguse, Ryan (Melissa) Raguse, Erika Raguse, Craig (Tara) Hauglie, and Michael (Anna) Hauglie; five step-grandchildren, Matt, Rachelle, Elizabeth, Tiffany, and Taviah; 17 great-grandchildren; a sister, Beverly Larson of Kensington; and a brother, Allen (Cindy) Carlsen of Alexandria. In addition to her parents, she was preceded in death by an infant grandson, Bryan Hauglie; brother, Melvin; sister, Carolyn; sister-in-law, Margaret; and brother-in-law, Leonard. Visitation: 5 – 7 PM Tuesday, with a 6:30 PM Prayer Service, at Erickson-Smith Funeral Home, Elbow Lake, and one hour prior to services at the church Memorial Service: 1 PM Wednesday, December 30, 2015, at United Lutheran Church in Elbow Lake Clergy: Pastor Jean Ohman Interment: First Lutheran Cemetery, Kensington, Minnesota Online Guestbook: EricksonSmithFH.com To order memorial trees or send flowers to the family in memory of Bernice Hauglie, please visit our flower store.