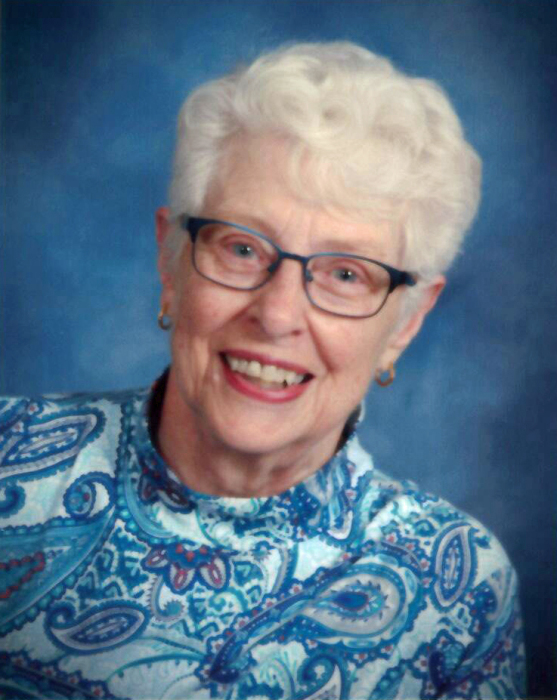 Barbara Lou was born on September 2, 1933 in St. Paul, MN, the daughter of Kenneth and Beatrice (Main) Meyer. She attended Mattocks Elementary and Monroe High School in St. Paul. Barbara received her bachelor’s degree in mathematics with a minor in Spanish from Macalester College University in St. Paul.

On May 9, 1953, she married Marius Joseph at Holy Spirit Catholic Church in St. Paul. To this union were born three children, Kathryn, David and Steven. The family lived in St. Paul and moved to Wendell in 1961. Barbara worked for many local businesses as an accountant, retiring after over 65 years of service. One of Barbara’s biggest achievements was helping to develop accounting software for Great Plains.

Her hobbies included being an avid reader, often reading books multiple times and enjoyed art and painting. Barbara was an accomplished knitter, often knitting afghans for her grandchildren and great grandchildren. She was known for her personalized Christmas Stockings. She enjoyed her trips to San Diego and Wisconsin to spend time with her children and family. Barbara was a people person who cherished visiting with family and friends. She was a member of St. Olaf Catholic Church and the Ladies Aid in Elbow Lake.

She was preceded in death by her parents, Kenneth and Beatrice; brother-in-law, William Martineau and daughter-in-law, Darla Martineau.

Memorial Service: 10:00 a.m., Saturday, November 2, 2019, at the Glende-Nilson Funeral Home in Fergus Falls, with a memorial gathering one hour prior to the service.

Funeral arrangements are with the Glende-Nilson Funeral Home of Fergus Falls for Barbara Martineau.

To order memorial trees or send flowers to the family in memory of Barbara Martineau, please visit our flower store.