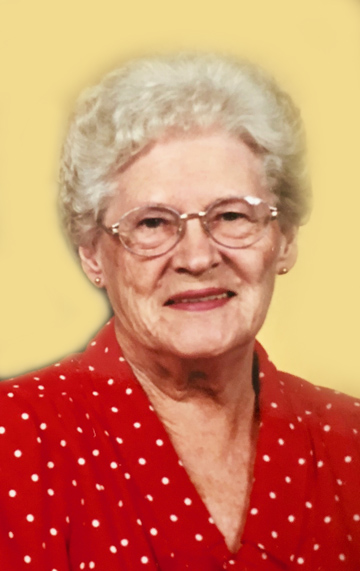 Audrey Laverne Ackerson was born on November 13, 1925 in Fergus Falls, MN to Orville and Alvina (Anderson) Melby. She attended school and graduated from Fergus Falls High School in 1944. She worked for a short time at the JC Penny store in Fergus Falls and met the love of her life roller skating.

On December 30, 1945, Audrey married Ansem Ackerson at Bethlehem Lutheran Church in Fergus Falls, MN. They spent their life together on Ansem's family farm in rural Erdahl Township and farmed together for over 60 years.

Audrey was an active member of Erdahl Lutheran Church. She enjoyed gardening, was a fabulous cook, and enjoyed traveling with Ansem. Audrey was a kind and gentle soul with a love for life and a great love for her family. She had a heart of gold and a willingness to help anyone in need.

Audrey entered God's loving arms on Tuesday August 21, 2018, surrounded by her family, at Steven's Homes Plus in rural Barrett, MN, at the age of ninety-two years.

She was preceded in death by her husband Ansem; her parents and grandparents; her three brothers; one sister-in-law; one brother-in-law; and her son-in-law.

To order memorial trees or send flowers to the family in memory of Audrey Ackerson, please visit our flower store.