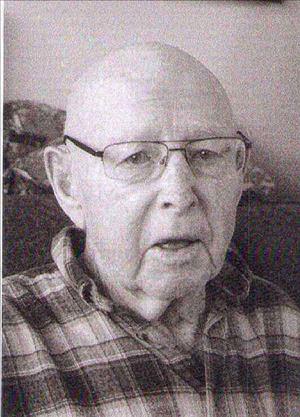 Arnold E. Westrum, 86, of Hoffman, died Wednesday, Dec. 26, 2012, at the Hoffman Good Samaritan Society. Memorial Service: 1:00 pm Monday, December 31, 2012, Messiah Lutheran Church, Hoffman Clergy: Rev. Nathan Thompson Visitation: 12 noon to 3 pm Sunday at the Funeral Home; one hour prior to the service at church on Monday Burial: Land Cemetery, Hoffman Red was born May 19, 1926, to Hans and Carrie Vestrum at home and baptized in Cyrus, MN. The youngest of five children, Red moved to Hoffman at the age of ten years. He was confirmed in Lands Lutheran Church. In 1944 Red graduated from Hoffman High and enlisted in the U.S. Navy. In 1946 he was discharged with rank Fireman First Class. After attending Dunwoody Institute in Minneapolis, Red returned home to the family Hoffman Blacksmith Shop. For over 50 years he loved working in the shop alongside father Hans and brother Hank. On May 27, 1950, Red married Ann Arnquist and for near 59 years they made their home and raised three sons on the shore and in the water of Elk Lake. It's been said: "All work is an act of philosophy." With conviction Red expressed his beliefs through his "work" as a loving husband, father, son and brother; as a member of Messiah Lutheran Church; as a parade and color guard member of the American Legion; as a main-streeter in the commercial club; as a boy scoutmaster; as a solid friend playing at buddies' backyard projects; whistling late into the evening on endless shoreline improvements; for over 30 years as a soft-spoken school bus driver; and as a volunteer delivering Meals-On-Wheels. Red was the last of the well-known Class of '46 deer hunters. He loved holidays with family, friends, fishing, traveling, whist, and reading history.

Red is survived by sons Darrell (Paula), Rollin, and Larry (Vickie); six grandchildren; and thirteen great-grandchildren. He was preceded in death by his wife, Ann; parents, Hans and Carrie; brother Hank, and sisters Norma, Millie, and Ellie.

Also, One hour prior to the service at church

To order memorial trees or send flowers to the family in memory of Arnold Westrum, please visit our flower store.