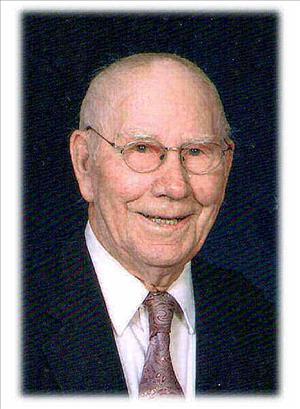 Arnold R. Ehlers, 97, Barrett, died Monday, December 24, 2012, at the Barrett Care Center. Funeral Service: 1:30 pm Saturday, Dec. 29, 2012, United Lutheran Church, Elbow Lake Clergy: Rev. Bob Toso Burial: Ness Cemetery, Elbow Lake Visitation: Friday, Dec. 28, 5-7 pm with Sharing Time at 6:30, at the Funeral Home; visitation will resume at the church one hour prior to the service. Memorials are preferred to the Grant County Food Shelf, or donor's choice. Arnold Roland Ehlers was born July 26, 1915, in Ward County near Douglas, North Dakota. His parents were John and Olina (Ostrom) Ehlers. He attended grade and high school in Douglas, graduating in 1932. Arnold went on to Ellendale College in North Dakota to graduate with a four-year Bachelors Degree of Science and Industrial Arts. During those years, he worked his way through school doing various jobs such as restaurant work, being a custodian and working at the International Harvester Implement Company. In 1937, Arnold accepted a teaching position at Oakes, North Dakota, where he taught Industrial Arts Science and Chemistry for two years. In 1939, he accepted a teaching job in Powers, Oregon, where he taught Industrial Arts, welding, metal work, wood working, science, and coached basketball. He also served as Scout Master of the Boy Scouts of America. During his summers, he also worked at several jobs such as working at a logging camp, painting and welding at the Kaiser Shipyard in Vancouver, Washington. In 1942, Arnold was called into service by the United States Army. He was trained in airplane mechanics as part of the US Army Air Corp and served our country by maintaining and reconstructing planes. In the fall of 1945, he was discharged and he returned to Elbow Lake. Arnold met Doris Mickelson at the Roosevelt Ball held at the Elbow Lake Community Building on January 30, 1946. On October 26, 1946, they were married. The couple lived in Minot for a year before returning to Elbow Lake and began farming. They purchased the farm where Arnold's grandparents and mother lived. They raised three children – Sharon, Robert and Mark. In 1978, Arnold retired from farming and he and Doris moved to town. Arnold continued to help his sons on the farm. They spent 18 winters in Arizona where they shared time with special friends. In October 2004, they moved to Maplewood Manor. Arnold was a member of the United Lutheran Church and the American Legion Post 321, Elbow Lake. In October of 2012, Arnold and Doris celebrated their 66th wedding anniversary. Arnold is survived by his wife Doris; daughter Sharon (Dave) Strunk of Hoffman, sons Robert (Connie) Ehlers of Barrett and Mark (Diane) Ehlers of Elbow Lake; eleven grandchildren and twenty great-grandchildren; and several nieces and nephews. He was preceded in death by his parents John and Olina; two sisters, Helen and Violet; five brothers, Louis, Earl, Jack, Nevin and John; and one great-grandson, Marcus Ehlers.

Sharing Time at 6:30pm; visitationr resumes one hour prior to service at church

To order memorial trees or send flowers to the family in memory of Arnold Ehlers, please visit our flower store.