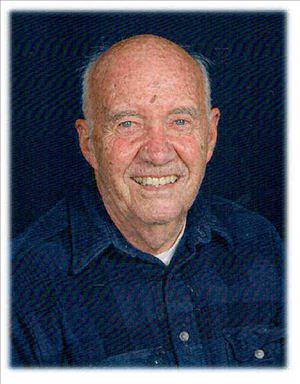 Arnold "Andy" Anderson, 79, of Dalton, passed away at the Broen Home in Fergus Falls on Tuesday, January 22, 2013. Arnold "Andy" Harold Anderson was born June 12, 1933, at Dairyland, Wisconsin, to Harold P. and Hazel L. (Zach) Anderson. As a child, he moved with his parents to South St. Paul where he graduated from high school. He served in the U.S. Coast Guard, with his final service being in Alaska. After his discharge, he attended the Dunwoody Institute, graduating from the Electronics Division. He worked at Honeywell, Control Data, and Seagate. On September 20, 1958, Andy was united in marriage to Elaine Lehrke in South St. Paul. They moved to Wyoming, Minnesota, where they raised their family and lived until they retired. On January 1, 2001, they moved to Dalton. Andy moved to a nursing home in Fergus Falls in 2008. Andy was an ardent conservationist, hunter and fisherman. He often said, "Fishing is always good—catching sometimes isn't." Andy is survived by his wife Elaine of Dalton; children Joanne (Dave) Johnson of Wyoming, Minnesota, Richard of Shoreview, Wayne (Lita), of Richfield, and Janice (Tom) Amundson of Elbow Lake; grandchildren Megan and Eliza Amundson of Elbow Lake and Beckett and Asher Anderson of Richfield; his mother Hazel of New Brighton; brother Donald (Donna) of Shoreview; sisters-in-law Lucy King of Santa Margarita, California, Erna (Hartley) Ellingson of Christine, North Dakota, Evelyn Witz of Inver Grove Heights, and Marlisse Klimas of Inver Grove Heights; and many nieces, nephews and cousins. He was preceded in death by one son, David; father Harold, and his parents-in-law Walter and Helen Lehrke. Funeral: 2:30 pm Sunday, January 27, 2013, Christ Lutheran Church, Elbow Lake Clergy: Pastor Don Wagner Visitation: 5-8 p.m. Saturday, January 26, 2013 at the Erickson-Smith Funeral Home; one hour prior to service at the church Cemetery: Fort Snelling National Cemetery, St. Paul

One hour prior to service at church

To order memorial trees or send flowers to the family in memory of Arnold Anderson, please visit our flower store.