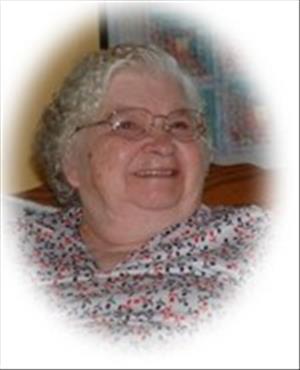 Anna Belle Anderson died at the ELEAH Medical Center on Sunday, February 21, 2010. Funeral Services will be held at 11:00 a.m. on Friday, February 26, 2010, at Peace Lutheran Church in Barrett, with Revs. Scott Ruud and Matt Rose officiating. Burial will be in Peace Lutheran Cemetery. Visitation is Thursday, February 25, from 5-8:00 p.m. at the Erickson-Smith Funeral Home in Elbow Lake, with a prayer service at 7:00. Visitation resumes one hour prior to services at the church.

Anna Belle was born on March 30, 1918, at Pontiac, Illinois, to George and Mary Ann (Baulman) Wagner. In 1921, she moved with her family to rural Grant County, where she attended country school.

On June 12, 1939, Anna Belle Wagner and Roy Anderson were united in marriage at Elbow Lake. The couple lived in the Herman, Donnelly, and Alberta areas, where they farmed until 1952, when they move to Barrett and purchased Barrett Recreation. They later started an in-home bait and tackle business.

Anna Belle spent many years sewing and quilting for her children and grandchildren. She took pride in her large vegetable and flower gardens, growing and canning her produce. She and Roy enjoyed spending two weeks each winter fishing at Breezy Shores in Detroit Lakes. She also helped Roy in his saw sharpening business.

In February 2005, Anna Belle became a resident of the Barrett Care Center. Roy passed away on July 25, 2006, and she is now joining him in their eternal resting place.

She was preceded in death by her parents, husband, brothers Henry, Howard, Homer, and Harley; sisters Verna, Sadie, Cora, Susie, Millie, and Ruth; and one granddaughter Veronica Lynn Anderson.
To order memorial trees or send flowers to the family in memory of Anna Anderson, please visit our flower store.