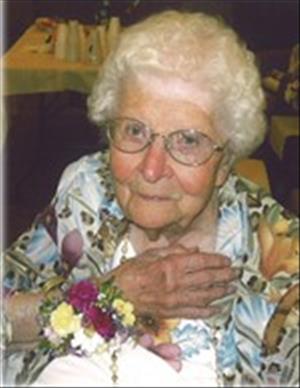 Alva E. Pederson, age 100, long-time resident of Kensington, died Sunday, April 26, 2009, at the Knute Nelson Memorial Home in Alexandria. A memorial service will be held at 2:00 pm on Tuesday, May 5, at First Lutheran Church in Kensington. Burial will be in the First Lutheran Cemetery, Kensington. Family will greet friends at the church one hour before the service. Alva was born on August 27, 1908, and raised in Salem Township, the daughter of Herbert and Amanda (Stark) Wetterling. She attended school in Kensington and Teacher's Training in Glenwood and then taught in rural schools near Kensington for ten years. On June 27, 1937, she was united in marriage to Alton Margedo Pederson at the First Lutheran Church in Kensington. To this union were born a son, Donald, and a daughter, Arlene.

Alva made her home in Alexandria and Moorhead until her husband's death in 1965 when she returned to Kensington where she lived independently until age 95. At that time, Alva moved to Sharon Elsner's Foster Home in Alexandria. In October 2006, she moved to the Knute Nelson Memorial Home in Alexandria. Alva lived to celebrate her 100th birthday in August of 2008. She is survived by a son, Donald Margedo Pederson and his wife Bonnie of Knoxville, Tennessee, and a daughter, Arlene Marie Pluth and her husband John of Edwards, Colorado; one grandchild, Scott Donald Pederson and his wife Amanda of Knoxville, Tennessee; a great-grandson, Taylor Scott Pederson, and a great-granddaughter, Madeline Christine Pederson, also of Knoxville. Alva was preceded in death by her parents, her husband, and three brothers, Rudolph, Vernold, and Joseph, and several nieces and nephews. In lieu of flowers, memorials are preferred to the First Lutheran Church in Kensington, First Lutheran Cemetery in Kensington, or the Knute Nelson Memorial Home in Alexandria.
To order memorial trees or send flowers to the family in memory of Alva Pederson, please visit our flower store.