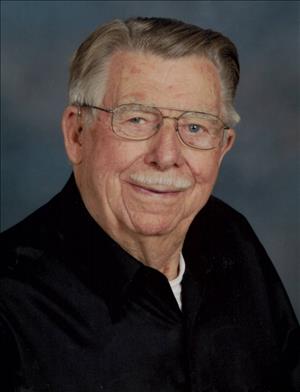 Allen Hartman, 88, of Barrett passed away Wednesday, March 25, 2015 at Johnson's Home Plus, Barrett.

Allen was born April 4, 1926, in Nobles County, MN to Carl and Mabel (Syverson) Hartman. He spent his early years helping with the family farms in Brewster, Lakefield and Iona, MN. He enjoyed roller-skating and motorcycling. As a young man he spent time in California, which was always a special place to him. Allen served his country in the Army during the Korean War. In 1953, he married Marjorie and with Dave, they moved to Grant County, MN to begin farming in Lien Township, southwest of Barrett. He was a lover of mathematics and inspired his children to work crop yields and other real math problems both out on paper and in their heads. He estimated the bushels per acre better than most could figure it on paper. In 1977, the family moved to Barrett, where he lived until the last four months of his life. He continued to farm for a time, but in 1986, he began trucking. He rolled those 18-wheelers across country until he was 78 years old! Allen is survived by four children: Dave (DiAnne) Hartman of Barrett, MN, Allen, Jr. (Joy) of Louisa, VA, Marcy (Mark) Stave of Bentonville, AR, and Wendy (Paul) Klebs of Waite Park, MN; 11 grandchildren and seven great-grandchildren, including Dawn Hartman, Dylan and Jackson Wichtendahl of Alexandria, MN, Dale (Kari) Hartman, Jordan, Brady, Alana, and Lindsay Hartman of Buffalo, MN; Kerry Hartman of Louisa, VA , Cheyenne and Zemirah Hartman of Manassas Park, VA; Donald (Jessa) Stave of Fort Smith, AR, Daniel Stave of Conway, AR, David Stave of Corpus Christie, TX, and Miranda Stave of Dallas, TX; Mercedes Klebs of Minneapolis, MN, and Elizabeth and Ariana Klebs of Waite Park, MN. Other survivors include three sisters, Alice Boom of Alexandria, MN, Betty Karl of Alexandria, MN, June Lindsley of Marshall, MN and a special friend Betty Renstrom of Elbow Lake, MN. His parents; his brother Charles; three sisters, Eileen, Lorraine, and Mary; and his wife of 53 years, Marjorie, preceded Allen in death. Visitation: 4 PM – 6 PM Sunday, at Erickson-Smith Funeral Home in Elbow Lake, and one hour prior to services at the church Funeral Service: 11 AM Monday, March 30, 2015, at Grace Evangelical Free Church, Elbow Lake Clergy: Pastor Gabriel Norton Interment: Union Cemetery, Elbow Lake Condolences: EricksonSmithFH.com To order memorial trees or send flowers to the family in memory of Allen Hartman, please visit our flower store.