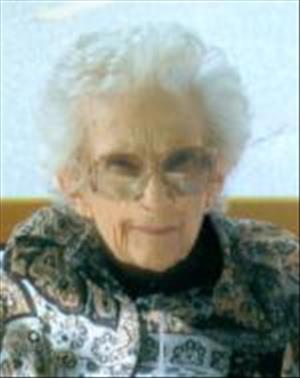 Alice L. Dilly, 95, formerly of Herman, died Friday, July 2, 2010, at the Westwind Village in Morris. Funeral services for Alice Dilly will be held at 11:00 am Tuesday, July 6, 2010, at United Methodist Church in Herman with the Rev. Mickey Olson officiating. Burial will be in the Lakeside Cemetery, Herman. Visitation is one hour before the service.

Alice Leona Schuman was born September 13, 2014, in Herman to Otto and Ella (Kietzman) Schuman. She grew up on the family farm near Herman with her siblings Scotty, Ray, and Betty. She graduated from the Herman High School in 1933. Alice then worked as a cook and a waitress in cafes in Herman and Norcross. This was where she met Verlyn Dilly whom she married in 1940. To this union a son, Allen "Johnny," was born.

Alice continued to work in cafes and started as the Norcross news correspondent for the Herman Review, which she did for many years. Alice then started as a bookkeeper at the Norcross Co-op where Verlyn was the manager. She retired in 1981 but kept busy as the church secretary and sitting in on elections for many years. Alice loved spending time with family and friends, baking, cooking, gardening, sewing, ceramics, playing dominoes, and other hobbies.

She is survived by her daughter-in-law Sharon Dilly, Sauk Rapids; grandchildren Mark of Morris, Wayne(Megan) Darwin of Australia, and Brenda (Matthew) Engelking of Sauk Rapids; three great-grandchildren, Allyn Dilly of Rochester, Heather (Adam) Fahje of Clontarf, Scott Garibaldi of Orange County, California, and two great-great-grandchildren, Austin Fahje and Asia Garibaldi. Other survivors include three sisters-in-law, Marcy Dilly of Alexandria, Millie Schuman of Herman, and Elsie Lesmeister of Morris, and many nieces and nephews.

She was preceded in death by her parents, her husband Verlyn, son Johnny, and two brothers and one sister.
To order memorial trees or send flowers to the family in memory of Alice Dilly, please visit our flower store.