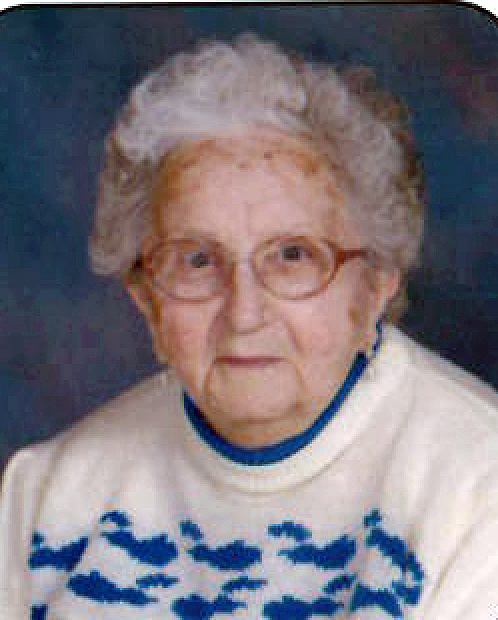 Alice Mae (Bottineau) Blomer was born in Beulah Township near Outing MN to Francis and Ica Mae (Olds) Bottineau.  She spent her youth near Outing and graduated 8th grade from the Remer School Dist.

She married John Blomer December 21, 1945 in Minneapolis, where they lived until moving to farm near Norcross in 1946.  In 1951 they purchased and moved to the farm near Barrett.  John and Alice raised their six children while farming and raising hogs and milking cows.  Alice particularly enjoyed the dairy operation and frequently handled the milking chores by herself—she was a hard worker.  She always will be remembered by her family for her fried chicken and apple pies, cinnamon rolls and homemade bread!

Alice continued to live on the farm after John’s death in 1997 until moving to Hoffman in 2004.  She lived there until moving to the Pioneer Senior Memory Care Cottages, in Fergus Falls in 2014.  She was a member of Zion Lutheran Church of Hoffman for 54 years.

HEARTFELT THANKS to the staff of Homestead Cottage for their tender, loving care for the past three years.

Alice was preceded in death by her husband of 52 years, John, sisters Cora, Mary and Josephine, brothers William and Alfred and son-in-law John Lunde.  She is survived by one sister, Agnes and three brothers, Stanley, Charles and Alvin.  Also survived by her children—Michael of Hoffman, John (Jean) of Kensington, Linda Quaal (Myron), of Verndale, Shirley Wicklund (Bruce) of Kensington, Sandra Lee (Jeff) of Barrett and Georgia Lunde of Fergus Falls, ten grandchildren, three step-grandchildren, twenty great-grandchildren and one expected, one step great-great grandchild.

Funeral Service will be Sunday, October 1st at 2pm at Zion Lutheran Church with lunch following.

Blessed be the Memory of Alice Mae Blomer.

Memorial Service:  2 PM Sunday, October 1, 2017, at Zion Lutheran Church in Hoffman, with visitation from 1PM - 2PM at the church.

To order memorial trees or send flowers to the family in memory of Alice Blomer, please visit our flower store.