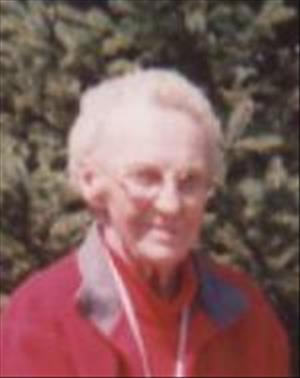 Agnes Nora (Goldstein) Sorenson was born November 1, 1925, in Webster (Day County), South Dakota, to John and Mary (Stich) Goldstein. The family moved to the Millerville, Minnesota, area when Agnes was a toddler. The family later moved to a farm south of Evansville. She attended rural school at District #49.

On June 3, 1953, Agnes was married to Russell Sorenson at St. Ann's Catholic Church in Brandon. The couple made their home in Erdahl where they raised two sons, Roger and Art. Russell passed away June 23, 2002.

Agnes was an avid gardener, belonging to the Grant County Garden Club, and was eager to share her experiences with those who asked. She was a dedicated member of St. Olaf's Catholic Church in Elbow Lake and Christian Mothers.

Agnes was preceded in death by her parents John and Mary Goldstein, and her husband Russell

Visitation: one hour prior to service
To order memorial trees or send flowers to the family in memory of Agnes Sorenson, please visit our flower store.